Parchment is animal skin (usually calf, sheep, or goat) that has been specially prepared as a writing surface, was the primary substrate for written texts during the medieval era (c. 500-1500), after which paper became increasingly common. 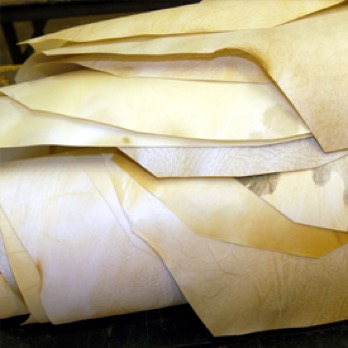 Why Is Parchment Important For Research?

There are more than one million parchment books in existence, spanning over a thousand years of history, along with countless additional documents such as deeds and wills. Together these items represent an incredible and as yet untapped resources for both scientists and humanists. This is the case for several reasons. Much parchment is preserved in relatively pristine condition in libraries. It holds special potential for the field of veterinary science and the history of human-animal interaction because it contains a year-by-year record of skins that almost certainly hold clues to the development of selective breeding practices, genetic diversity of medieval and early modern herds, the historical emergence of breeds, the production and trade of skins, and more. Parchment also holds answers to questions such as when and where a book was produced, how books were constructed, and potentially even who handled them, questions of perennial interest to humanists.

What Do We Need To Learn?

There are quite simply no parallel archaeological or faunal remains from the medieval era: well-preserved samples that are in many cases precisely dated and localized via the texts written on them. These data have been hiding in plain sight for centuries because techniques to extract and analyze DNA did not exist and the books had been regarded as repositories of textual rather than scientific data.

What Are We Doing?

In order to realize these possibilities, an interdisciplinary team from North Carolina State University comprising faculty from the College of Veterinary Medicine and the College of Humanities and Social Sciences is working to extract and analyze the DNA in medieval parchment books. After a pilot project demonstrating that such extraction is feasible our team have embarked on a project led by Dr. Tim Stinson in CHASS titled “Medieval Monks Meet Modern Science: Using Genetics to Unlock the Secrets of Medieval Parchment Books and their Makers”. In this study our team is currently collaborating with the Rubenstein Library at Duke University, which holds hundreds of parchment documents. We have sampled almost 100 books spanning from 700 to 1700 AD and ranging from Ethiopian religious books to Torah scrolls from Israel and a variety of medieval and early modern volumes from across Europe.

What Will Our Data Reveal?

Our results will indicate the species, sex, and distribution of animal skins used, and provide an holistic view of the varieties of DNA (animal, human, bacterial) present in the volumes. Such work has already resulted in an unparalleled collaboration between fields as disparate as veterinary science, genetics, literary and historical studies, and rare book librarianship, and holds the potential to revolutionize research questions in each of these.