Canine transitional cell carcinoma (TCC), also known as urothelial carcinoma (UC), is the most common cancer of the canine urinary tract (1). Across all breeds the cancer represents an estimated 1-2% of all canine cancer, and with over 4-6 million cancers diagnosed in pet dogs each year in the US, the number of canine TCCs/UCs is estimated to exceed 50,000. However a group of 13 breeds, including the Beagle, has a much higher chance of developing the cancer. The cancer is generally a disease of mid to late life, with over 95% of cases occurring in dogs age 6 years and older. TCC/UC affects the bladder, urethra, and kidneys of male and female dogs and also the prostate of males. Clinical presentation of advancing TCC/UC is shared with other much more common urinary tract disorders, including cystitis and prostatitis. These may include one or more of the following: straining to urinate; repeated frequent attempts to urinate; blood in the urine; and bacterial infection.

TCC/UC is most often detected in the trigone of the bladder, a triangular region of smooth mucosa inside the dorsal wall of the neck of the bladder. Any thickening of the bladder wall in this location can lead to partial or complete obstruction of urine entering the bladder from the ureters, which may lead to kidney failure, or exiting the bladder through the urethra (2).

How is TCC/UC currently diagnosed?

A common route to diagnosis of a TCC/UC is one in which the dog is first taken to a veterinarian to assess the likely cause of the urinary tract symptoms stated above. In most cases the dog is then treated for the above symptoms, on the assumption that there is a non-malignant cause. It is common for these symptoms to initially be managed with repeated cycles of urine culture followed with antibiotic administration, and sometimes anti-inflammatory medications over several months. While this treatment approach may provide temporary relief of the symptoms, the underlying cancer causing these symptoms is still progressing. Consequently, during the time that the dog is being treated for the symptoms, the tumor can develop into a more advanced state, becoming larger, potentially invading the muscle wall, and also having a greater chance of spreading to other parts of the dog’s body (metastasis). When repeated treatments for the symptoms fail to fully resolve them, the dog is then evaluated for the presence of a TCC/UC, usually via urine cytology, abdominal ultrasound, and/or cystoscopy.

Where a mass is detected, it is recommended that a biopsy be taken and submitted for histopathology evaluation, which serves to confirm the diagnosis of a TCC/UC and may also indicate if the mass has invaded the muscle wall. Further imaging and evaluation of local lymph nodes may be performed to assess the spread of the disease. At the time of diagnosis over 90% of cases are of intermediate to high-grade invasive TCC/UC (3). Superficial, low-grade tumors are very uncommon. In addition, at the time of diagnosis, ~20% of canine TCCs/UCs have already spread to other parts of the body (2). The high predominance of advanced tumors detected by conventional means may reflect the prolonged time taken to diagnose the tumors in most cases.

How is TCC/UC currently treated?

Currently, once finally diagnosed, treatment of canine TCC/UC most commonly includes the use of chemotherapy, cyclooxygenase inhibitors, and combinations of these drugs. Where single agent therapy is used, the proportion of dogs entering remission is generally low (<20%), although this is increased to 35–50% with combined chemotherapy and cyclooxygenase inhibitors. While less common than drug based intervention, surgery and radiation therapy are also used where appropriate (1). Regardless of the common drug treatment option used, median survival of treated dogs with TCC/UC is currently ~7-9 months.

What is the challenge for diagnosis?

Finding abnormal epithelial cells in urine sediment, or in samples obtained by traumatic catheterization, prostatic wash, and/or fine needle aspiration is used to support the diagnosis of canine TCC/UC (1,4,5). Cytological analysis of epithelial cells, however, may be misleading. For example, benign epithelial cells can resemble malignant cells with variation in cell size, and an increased number of basophils may be present after prolonged contact with urine or secondary to an inflammatory condition (6). Fine needle aspiration of tumor tissue carries the risk of disseminating tumor cells along the needle tract and so should be performed with caution (7,8). Currently, clinical diagnosis of canine TCC/UC requires comprehensive diagnostic workups, including blood test, urinalysis and diagnostic imaging, in addition to cytological examinations of tumor cells by skilled clinical pathologists, and histopathology of a biopsy specimen.

Regardless of the diagnostic process used, most TCCs/UCs currently go undiagnosed until they are at an advanced clinical stage and so are associated with guarded-poor prognosis. Improved methods for earlier and less invasive detection are needed. Detection of the presence of a TCC/UC earlier in the course of disease would allow appropriate intervention sooner, which is expected to improve quality of life and extend survival. At the very least, earlier identification of the presence of a TCC/UC as the underlying cause of the common symptoms would avoid prolonged delays in detecting the cancer, expediting treating of the cancer and not just the symptoms.

What is the new opportunity for early detection of canine TCC/UC?

In two recent independent studies, performed by us at North Carolina State University (NC State) (9) and also by our colleagues at the National Institutes of Health (NIH) (10), a single mutation in the canine BRAF gene was detected in pathology verified tumor biopsy specimens of canine TCC/UC. We identified the mutation by comparing the DNA sequences of all genes of the dog DNA isolated from TCC/UC tissue samples with those from non-neoplastic tissues. The NIH team identified the mutation by looking at RNA sequences in affected tissues. The discovery of the same mutation independently by two groups using two different approaches provides cross validation of the data.

TECHNICAL DETAILS.  In the canine genome sequence at nucleotide position 8,296,284 on dog chromosome 16, the DNA nucleotide is a ‘T”, but in the tumor cells of 85% of cases of TCC/UC, this base has mutated to an “A”. The result of this single mutation is one amino change in the BRAF protein; the amino acid is supposed to be a valine, but in the tumor cells it is a glutamic acid. This mutation is located in the activation segment of the kinase domain of the BRAF gene and the change in this one amino acid produces a mutated protein with increased kinase activity. The consequence of this change is that it signals the cells to proliferate, leading to the development of a tumor.

Dr. Breen’s lab at NC State has been randomly screening urine specimens from dogs over age 6 years, from breeds considered at high risk of developing a TCC/UC, including Beagles.
The research team has already identified the presence of a suspected TCC/UC is dogs before they developed any clinical signs of the disease.  Subsequent examination of these dogs by their veterinarian, followed by high-resolution ultrasound, identified a very small mass. In these cases, in all dogs where the presence of a BRAF mutation was detected in their urine, the dogs subsequently progressed to develop clinical signs over the following months. This is a very exciting step forward for the earliest detection and treatment of dogs with TCC/UC. 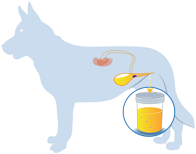 BRAF Mutation Detection testing has been designed specifically to identify tumor cells carrying a spcecific BRAF mutation that is present in 85% of all canine TCC/UC cases. This form of testing can detect mutant bearing cells in a urine sample and has been detecting cases several  months before any clinical signs associated with the cancer become evident. This is very important for earliest detection and enables owners of dogs that test positive to follow up with their veterinarian and seek the most appropriate treatment very early in the course of the disease, which is expected to improve both the quality and duration of the dogs’ lives. Unlike previous and less discriminatory tests for canine TCC/UC, BRAF mutation testing by ddPCR is not affected by the presence of blood or bacteria in the urine.

Importantly, in all cases that have tested positive for the presence of BRAF mutation, and which have subsequently had a biopsy of a visible mass for pathology evaluation, there is 100% concordance between the presence of a BRAF mutation detected in free-catch urine and subsequent confirmation of a TCC/UC in the biopsy of the mass (i.e this test does not have false positives). In studies of several hundred controls, a BRAF mutation has NOT been detected in urine specimens from dogs that do not have TCC/UC.

The goal of screening for early detection of a TCC/UC is to allow earlier confirmation of diagnosis and thus provide more time to treat the cancer and not just the symptoms.

How will this new early detection of TCC/UC help dogs?

Several breeds of dogs are at an elevated risk of developing a TCC/UC, meaning that they are more likely to develop this cancer than the general dog population. The mean age of diagnosis of TCC/UC in most breeds is considered to be 9-10 years, and 95% of all cases are diagnosed in dogs age 6 years and older.  This means that 1 in 20 dogs with TCC/UC develop the cancer at 5 years and under. The ability to reliably detect the presence of a TCC/UC earlier in the course of disease provides more time for the dog to be treated for this cancer.

Starting at 6 years of age, we have been screening urine samples collected from high-risk breeds every few months for the presence of the BRAF mutation. So far we have screened hundreds of urine sample and each time we detect the mutation the dog either has a mass in the urinary tract, or has gone ion to develop one within a few months.

Our initial data suggest that we have generally been detecting the presence of a TCC/UC 3-4 months (and sometimes longer) before the dogs developed any clinical symptoms. These data suggest that early detection would require screening to be performed every four months beyond age 6 years. We have teamed with the American Kennel Club to work on a project (funded by the Morris Animal Foundation) that is evaluating the impact of early detection on disease progression. This study has engaged thousands of dog owners across the US to identify dogs that are shedding cells into their urine with a detectable BRAF mutation, but which have not yet started showing clinical signs. Rigorous clinical evaluation of these early detection dogs over time is providing data that will help our team of clinicians to determine to the time to clinical presentation and then disease progression.

Further reading – the science behind the testing.

TO LINK TO THE STUDY CLICK HERE
This study reports on the presence of the BRAF mutation across numerous canine cancers, highlighting the high frequency of the mutation in canine TCC/UC.

TO LINK TO THE STUDY CLICK HERE
This study reports on the development of the BRAF mutation assay used to detect the presence of the mutation in urine specimens.

TO LINK TO THE STUDY CLICK HERE
This study reports on an independent discovery of the BRAF mutation in canine TCC.